Both the sandflies and mosquitoes are very temporary ectoparasites, with the main concern being their ability to act as vectors for important VBDs. Currently neither is of significance as a vector in the UK, either because the parasite is not established in the UK (sandflies) or because the disease is not established in the UK. Prevention of biting is, however, critical in areas of Continental Europe where these VBDs are endemic. 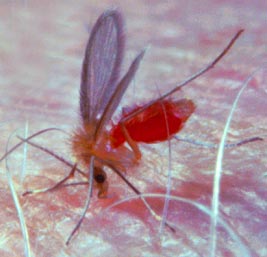 In Europe only sandflies of the genus Phlebotomus are of veterinary importance due to their ability to transmit Leishmania spp., and these are well described in the Mediterranean region.

Little is known about the complex biology of the phlebotomes but they are extremely important as vectors of protozoan parasites of the genus Leishmania.

Leishmania infantum is transmitted by sandflies and leishmaniosis is a serious disease of dogs, which are the main reservoir hosts for this parasite. L. infantum can also affect humans and is thus a public health hazard, especially for children and immunodeficient adults. For more information about leishmaniosis visit the protozoa section of this website.

The development of sandflies from egg to adult fly takes place in soil rich in organic matter and laboratory studies indicate that organic matter from lagomorph or rodent faeces is necessary. The development from egg to adult under favourable conditions is around 4 – 6 weeks. The seasonal dynamics of sandflies have not been fully explored but some species go into diapause over winter as fourth stage larvae. Most species of sandflies seek their hosts immediately after sunset and during the day, adult flies rest in cool humid places such as cracks and holes in stone walls, dark cellars or livestock accommodation. 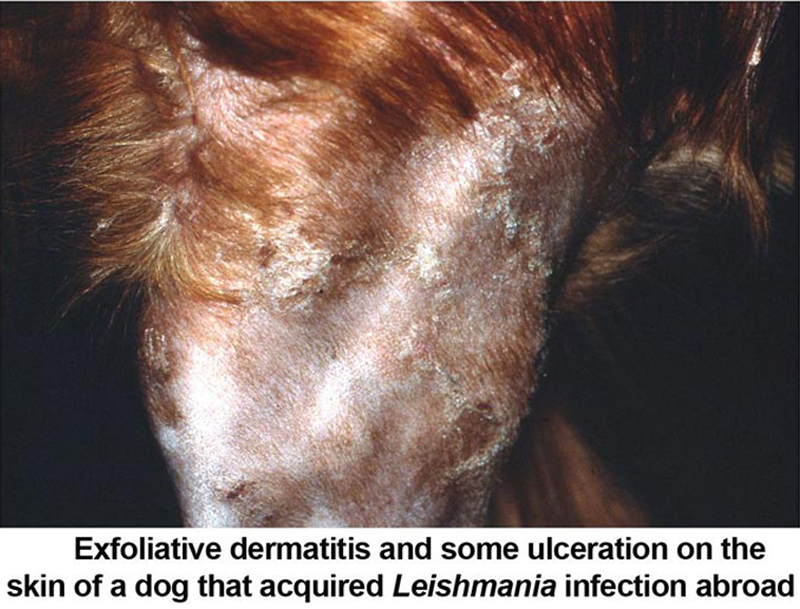 Initial sandfly bites typically induce sensitisation resulting in immediate or delayed-type skin reactions to subsequent bites. These are seen as pink to red, 2-3 mm papules, which remain prominent for several days before gradually disappearing. The moderate to severe pruritus induced results in scratching and self traumatisation with subsequent secondary bacterial infection.

The biting sites are predominantly hairless regions of the dog such as the muzzle, around the eyes and the ears. For humans, desensitisation of those living in sandfly endemic areas is well described. In dogs, the sandfly bites themselves will rarely be reported to the veterinary clinic and demonstration of Leishmania infection may be the only indicator of any previous sandfly-host interaction.

Phlebotomine sandflies seek their hosts mainly at dusk or during the night. They are intermittent external parasites and as they feed quickly, they are rarely found on dogs. The sandfly bite is painful but will only be recognised after the fly has left.

Treatment of an existing infestation

Phlebotomine sandflies, as intermittent external parasites, cannot be included in any therapeutic approach similar to that applied for flea and tick infestations. All veterinary efforts are directed to minimise the sandfly host interaction.

The sandfly season in endemic areas may vary from year to year and is also dependent on the region and availability of suitable habitats. As a general rule however, the season starts in April and continues until November.

Measures taken to prevent phlebotomine sandfly bites are recommended to reduce the risk of canine leishmaniosis. This includes measures to minimise the exposure of dogs to sandflies:

Additionally, the use of insecticides with repellent activity against phlebotomes is recommended and regular application of these compounds throughout the sandfly season has been proven to significantly reduce the risk of dogs acquiring Leishmania infantum infections.

There are more than 3,500 known species of mosquitoes worldwide and, while they are mainly a nuisance for both animals and humans, they are of major significance as vectors of several important pathogenic organisms.

In Europe more than 70 species are known as potential intermediate hosts for filarial worms of the genus Dirofilaria. These include mosquitoes of the genera:

The latter, originating from south east Asia, has now been reported from 12 European countries including Spain, France, Italy, Switzerland and as far north as the Netherlands.

Dirofilaria immitis and Dirofilaria repens are important nematodes in dogs and cats.

All mosquitoes develop from egg to pupal stage in water. Adult flies lay their eggs in a variety of water sources ranging from small containers to vast expanses of marshland. The larval stage is always aquatic and shuttles from the subsurface, where it feeds on micro-organisms, to the surface to obtain oxygen through its breathing apparatus. The pupal stage does not feed, but unlike most insect pupae it is extremely active. The adult emerges from the pupal case using air pressure and then assumes a terrestrial existence. 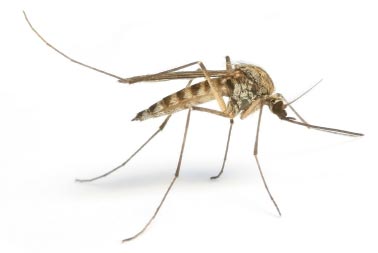 Most mosquito bites are harmless but unpleasant and usually itch due to an allergic reaction to mosquito saliva. Their main veterinary importance is in the transmission of the heart worm Dirofilaria immitis and Dirofilaria repens, which causes cutaneous dirofilariosis; mosquitoes also transmit other pathogens, especially viruses.

Mosquitoes are occasionally observed on dogs and cats when they are taking a blood meal, however, clinical and diagnostic procedures are usually directed to the demonstration of the presence of mosquito-transmitted pathogens in endemic areas or after animals have returned from endemic areas.

Treatment of an existing infestation

Mosquitoes, as intermittent external parasites, cannot be included in any therapeutic approach similar to that applied for flea and tick infestations. All veterinary efforts are directed to minimise the mosquito host interaction.

Some insecticides with repellent activity are also effective against mosquitoes but reliance on such compounds to prevent canine heart worm disease cannot be recommended.

The mosquito season may vary from year to year and is also dependent on the region and availability of habitats.

The application of insecticides to prevent mosquito bites may be recommended in some animals with sensitive skins. Although mosquitoes are a nuisance and transmit Dirofilaria spp., prevention of heart worm disease and cutaneous dirofilariosis is largely independent of any mosquito control measures.